On 10th May 2016 Catalyst on the ABC (watch the full story here) presented a story on the beneficial effects of exercise before, during and after chemotherapy treatment for cancer.  The results were better than anyone could have imagined.  Patients more than double their chances of surviving their cancer. In other words, they halve their risk of dying when exercise was implemented. 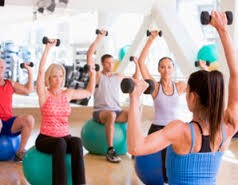 Exercise Medicine Research Institute in Perth, Western Australia is conducting trials to show the efficacy of exercise in the fight against cancer.  In their trials, patients are exercising under the supervision of an Exercise Physiologist directly after their chemo treatment is finished.  They literally walk from the chemo chair into the gym.  An Exercise Physiologist then tailors a program specific to the patients’ cancer and needs.

Anecdotally, the patients in the trial are reporting less negative side effects such as nausea and fatigue from the chemotherapy.  And oncologists are amazed at the transformation in their patients.   “I’m probably surprised by how good people’s blood counts are. I’m surprised by their wellbeing, by how well they feel on chemo” reported Dr Andrew Dean of his patients undertaking this trial.

But the evidence that truly surprised the doctors came from the DEXA machine – a machine which was used to track the fat, muscle and bone composition of each of the patients in the trial.  The typical patient on chemo will have a 10-15% decrease in muscle mass depending on the duration of the chemotherapy.  However, 38 patients who have gone through the exercise program, that muscle wastage was almost completely blocked. Some even gained.

As Professor Robert Newton states “that’s just a really fantastic outcome, because it not only improves their health and function, but it likely improves their capability to complete the full course of chemotherapy. That means they’re much more likely to survive.  We’re really excited about this. I believe it will actually change the management of cancer patients.  The benefit, in terms of muscle mass, is absolutely extraordinary, because we know that there’s no pharmaceutical intervention that can actually stop that decline in muscle mass. The only thing which will do that is highly targeted, prescribed, tailored exercise.”

The mechanism behind this success appears to be pretty simple – it’s all about blood flow.  Tumours have a very poor blood supply.  Exercise increases blood flow, potentially allowing more chemicals to infiltrate the tumour where it’s needed. Further to this, more recent science has shed light on the role of our immune system.

Our bodies are making potential cancer cells all the time, but our immune system regularly finds them and destroys them. Crucial to our tumour defence force are so-called ‘natural killer cells’. They’re one of the only cell types that can recognise threats generated by our own bodies and call in an attack. Ho

wever, in the case of cancers that develop into tumours, this defence is flawed and some cells slip past our defences and begin to grow.

This research has focused on what exercise does to the immune system.  The mechanism behind this success appears the be the body’s own in-built chemotherapy lab.  Natural Killer (NK) Cells are part of the immune system and help our bodies fight infection however with exercise they appear to super-charge in number and efficiency.  These NK cells then target the cancer causing cells or tumour more readily and attack, obliterating the cancerous cells.  It is believed that the increased circulation that occurs when a person exercises is how the NK cells become supercharged and more efficient killers.

Scandinavia has produced 2 ground breaking studies in the area of exercise and cancer.  The first in 2013 in Sweden was conducted on healthy males.  The participants were exercised on a stationary bike for 60 minutes.  Their blood was taken before and after the exercise.  The bloods were then poured over cancer cells.  Incredibly, the post exercise blood suppressed cancer growth by 30%.

Then this year in Denmark researchers studied mice with cancer and divided them into two groups.  One group was given unlimited access to a running wheel.  The other was not. They found that exercise reduced tumour growth by 60-70%.  They then biopsied the tumours and found that in the exercising mice, the tumour was packed full of natural killer cells.

Whist these trials are still on-going, it does appear that with all the above research a highly-specific, targeted exercise prescription for cancer patients will become a mainstay of cancer treatment in the not so distant future.  Rather than the previously very vague recommendation of moderate exercise.

As Professor Robert Newton states “The evidence is so strong now that the cancer patients deserve this medicine. It’s a very powerful medicine. It actually increases their survival and it has no side effects. So, what we need now is for the medical and health professions to embrace it and actually make it an integral component of the overall management of the cancer patient”.

Dr Shane Peace
OSTEOPATH at Pakenham Osteopathy
Shane Peace’s pathway to becoming a doctor of Osteopathy is quite convoluted.Finishing as dux of his school, Shane completed a Bachelor of Mechanical Engineering (Hons) at Monash University and worked in this field for several years before returning to study.He made a big career move into what has now become the fastest growing allied health profession – Osteopathy.He completed a Bachelor of Science (Clinical Sciences) then moved through to complete his Masters in Osteopathy at Victoria University.